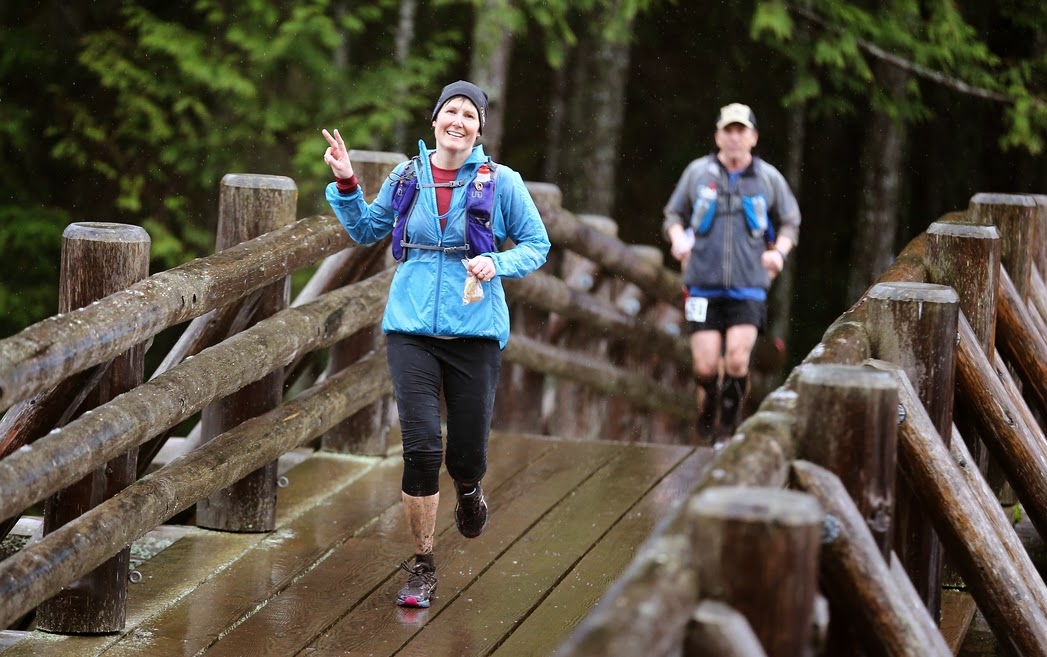 (photo by Glenn Tachiyama)
Today, I ran farther and climbed more elevation than I’ve ever done in one day. I was on the trail for 9.5 hours. I am a little tired! It was wet and foggy, so those amazing views that were advertised for this race were few, but it was still a beautiful and epic day.

It all started last fall when I got an email saying registration was open for a 25K and 50K trail race on Orcas Island. It was a lottery, and I thought, “What the heck, I’ll sign up for the 50K, I probably won’t get in.”  Ha, ha. So, my ever-supportive friend, Tami, and her canine, Baxter, accompanied me to the race. We headed to the island the day before the race and checked into a bed and breakfast. (Note: It is well worth getting a ferry reservation to the island as well as returned home from the island. We didn't have a reservation to get off the island and had to wait in a line!) We had a pasta dinner at a restaurant along the waterfront and were ready to retire to our room by 7PM.


The race started at 8AM and the finish cut-off time was 5PM. Luckily, they had an early start at 7AM for anyone who was worried about finishing in time. I took advantage of that! It was still dark when I started running, and there were quite a few other people who started early with me. I wasn't planning for darkness and was thankful when I remembered that my husband kept a headlamp in the car with fully charged batteries for emergencies. This dark morning was my emergency, and I grabbed it at the last minute and it worked great! 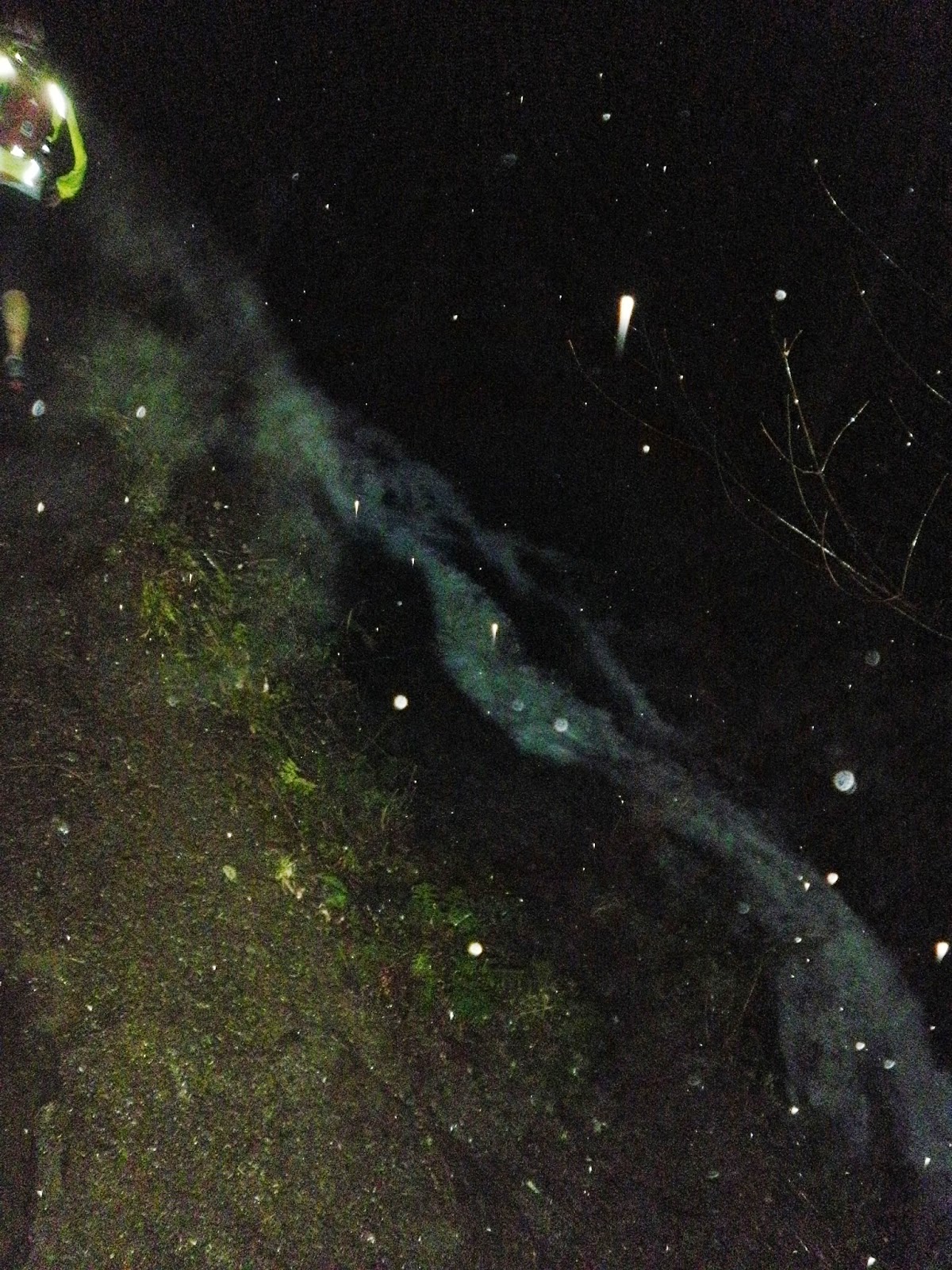 Shortly after the start, we ran by a waterfall. It is still dark out, and the white dots are my flash bouncing off the rain drops.
The forecast was for some rain, but the temperature would be in the 50s. I decided to wear three-quarter length running tights. On my top half, I wore a three-quarter sleeve athletic top under a long-sleeve running shirt. I also bought a special new running jacket at West Seattle Runner just for this race. It is a Brooks LSD Lite Jacket. It is water resistant and windproof. It was just right. I didn’t get too cold or too hot. 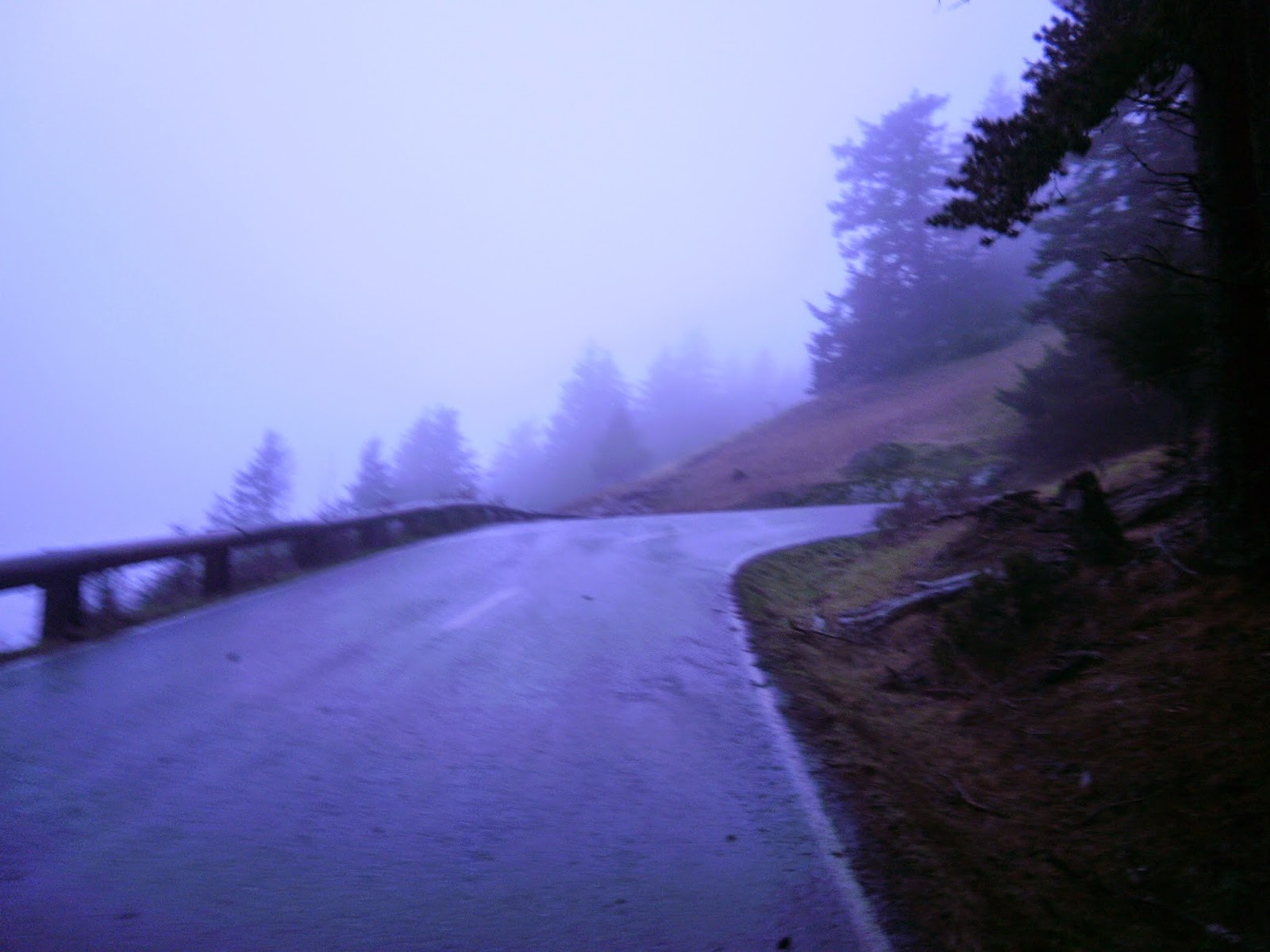 Heading up the road as it got light out. It was foggy all morning. 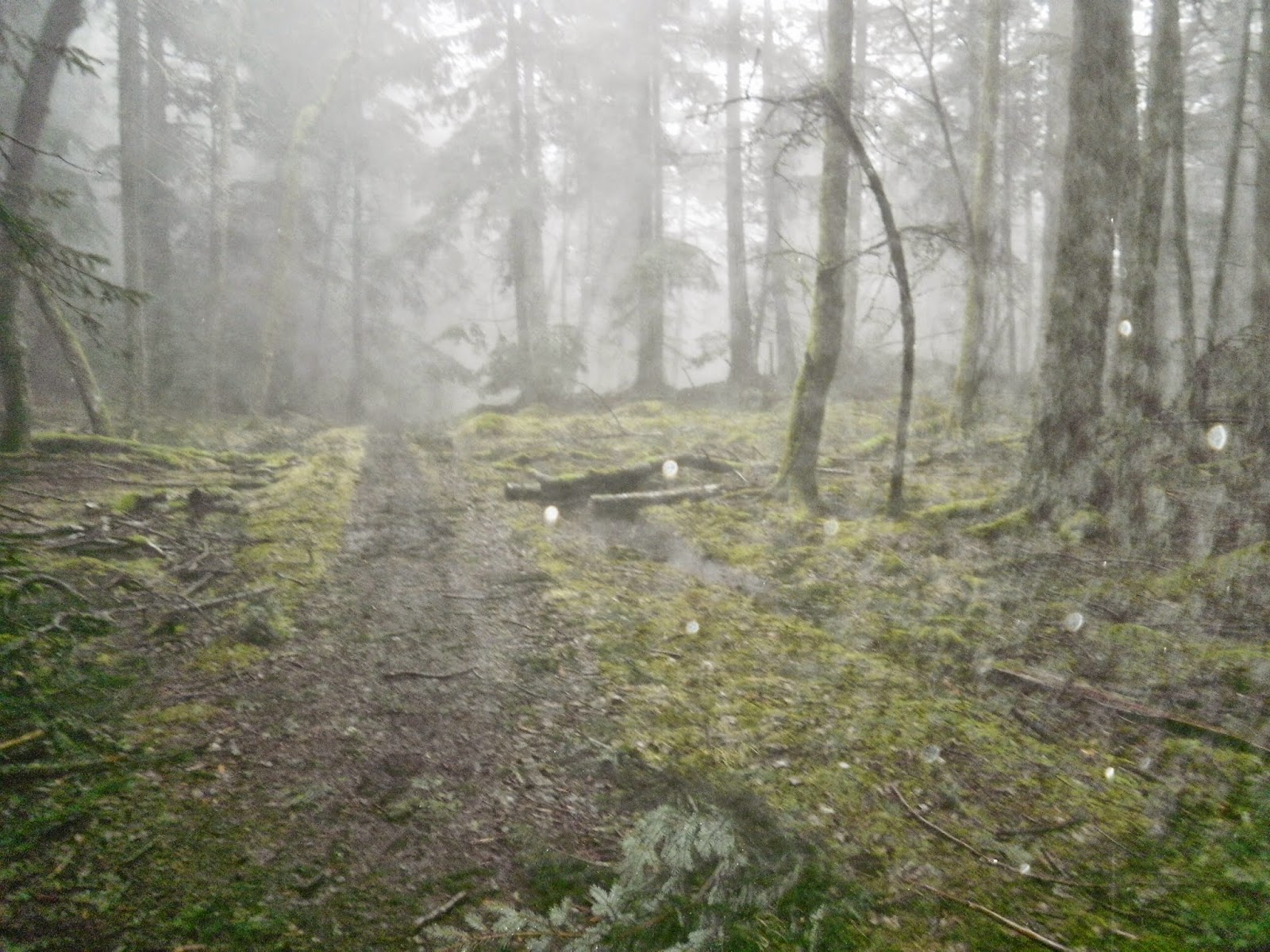 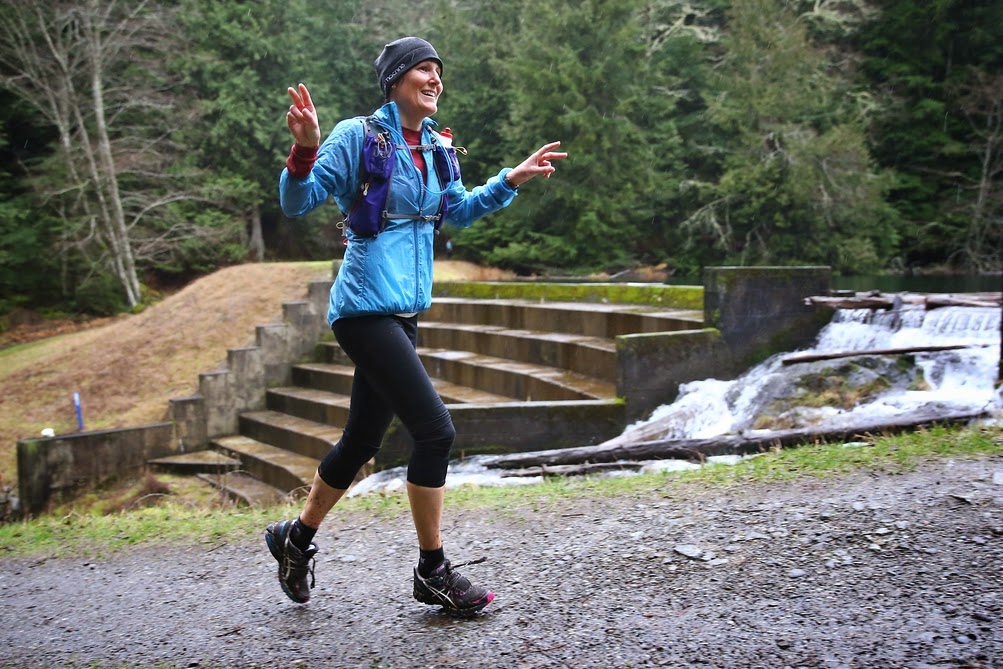 (photo by Glenn Tachiyama)
I should have paid a little closer attention to the course description before I signed up. It was hilly (I might say mountainous) with 8,400 feet of elevation gain. We ran a little bit on a road in the early part of the race, and the rest was single track--very wet, sloppy, muddy trails. I love the mud--I grew up on a farm and slogging through the mud half of the year was the norm. There were four aid stations. I had drop bags delivered to 3 of them. Each bag had another long-sleeved shirt, a ham and cheese sandwich, and roasted baby potatoes. I didn’t need all of it but it was nice to know I had it just in case. The aid stations were well supported by volunteers and stocked with a bunch of trail food and drink. I was comforted by the reliability of those aid stations!

As I approached the third aid station, I could hear Tami's cowbell ringing. I was so happy to leave the trail for a few minutes and rejoin civilization. At this point, I had gone 20 miles and over two big hills (I might call them small mountains). Next was the big climb up Mt Constitution. Holy smokes! We climbed straight up for 2 miles, in the mud, on the powerline trail and it reminded me of climbing under a steep chairlift. It took another couple of miles after that to reach the last aid station at the top of the mountain. It was sweet to arrive, but also cold and windy so I didn’t stay long. It was another 5 miles down to the finish. My quads were feeling it, but down hills are my thing so I grinned and bared it. I will probably be stiff for a few days after this one! 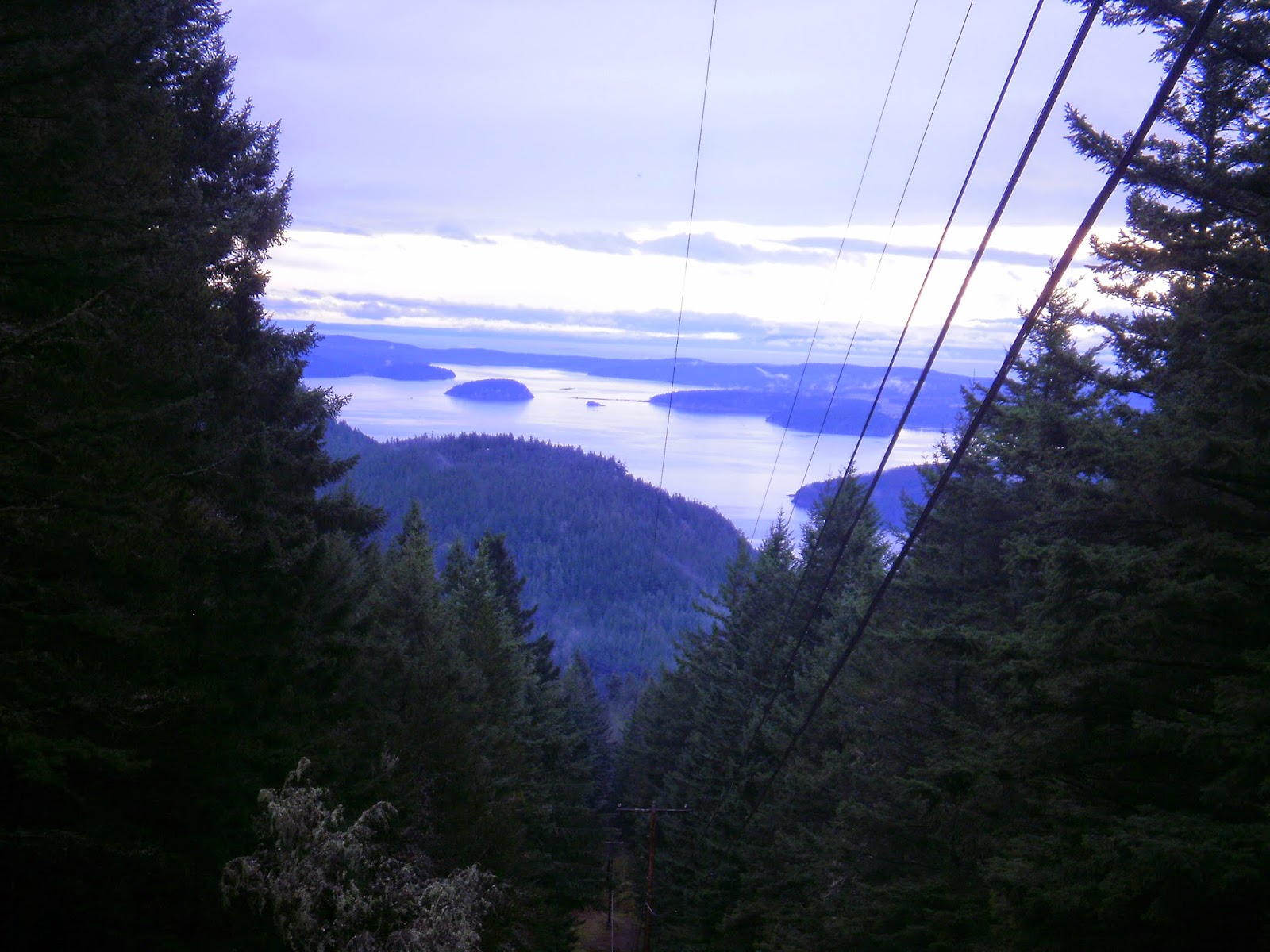 The clouds broke near the top of the powerline trail and I could see the San Juan Islands. What a view! 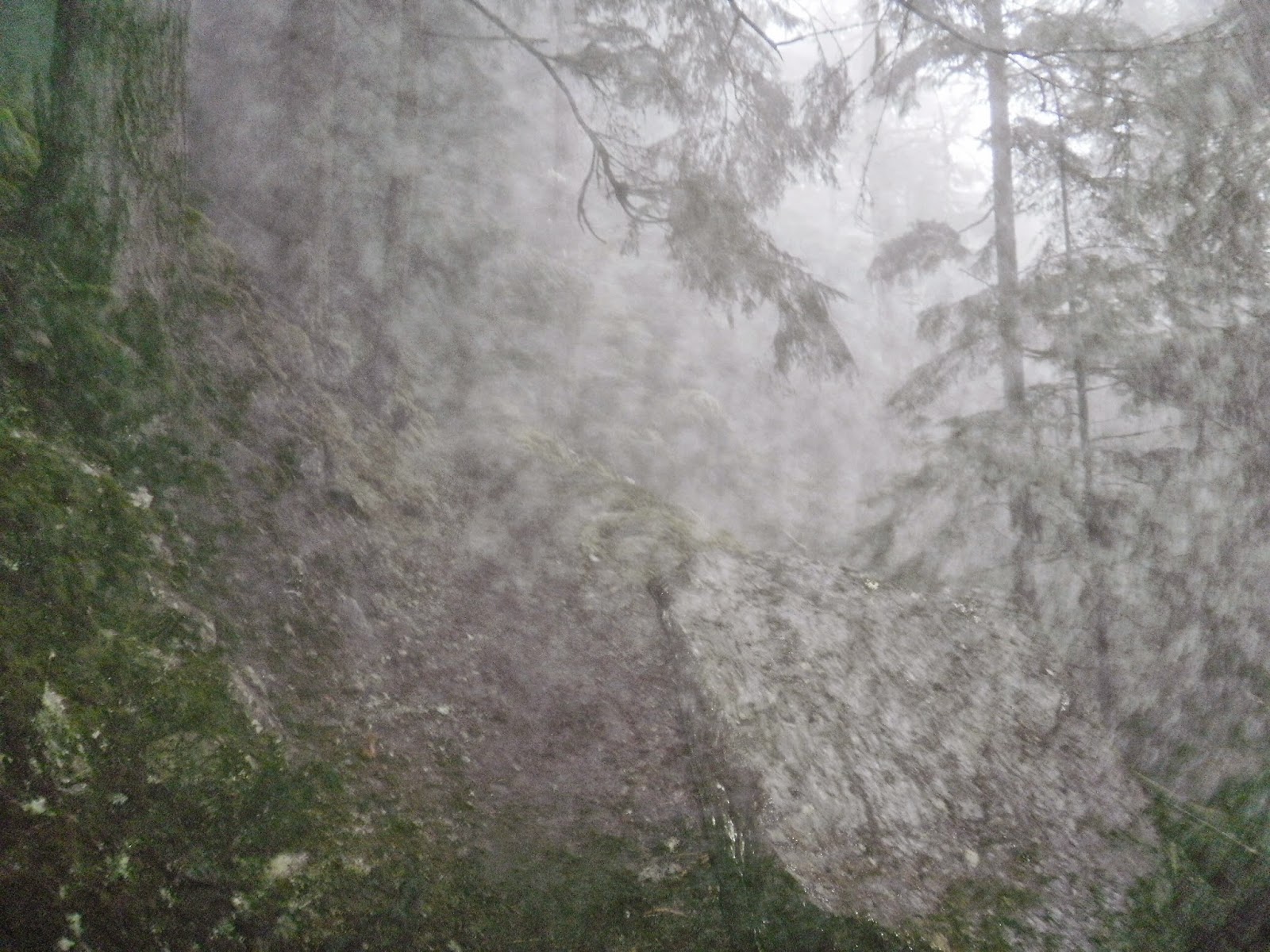 And then it started to rain again :( 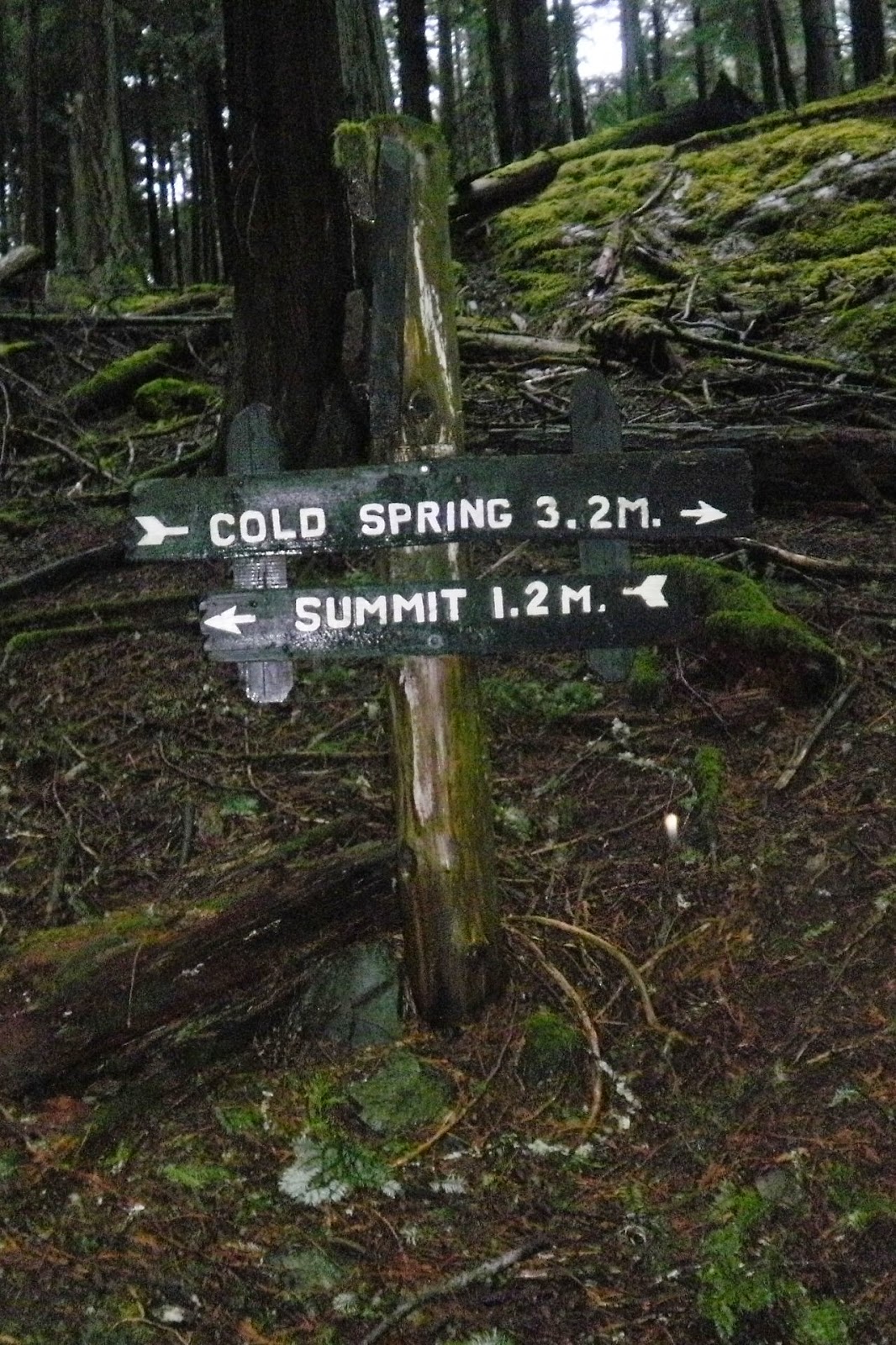 Only 1.2 miles to the summit of Mt Constitution! I had to hoot, and take a picture.
The finish was a party. These race organizers, Rainshadow Running, are partying folks with a running problem. I’m sure the band played and the pizza makers were baking for several hours. I, on the other hand, headed back to the ferry and home to my family. I will definitely be doing more Rainshadow Running races in the future!
Posted by Mary Ann at 10:35 PM

Mary Ann
I am a "weekend warrior." During the week, I am a CPA and independent consultant. I just finished a year of running 52 half marathons. And now I am moving on to adventures as an ultra runner. Please enjoy reading about my experiences and what I've learned along the way.